I am once again lucky enough to be in the early preview for OmniFocus 3 - this time on the Mac! What's important to keep in mind here is that this is a beta, and an early one at that - things can and likely will change between me writing this post and OmniFocus 3 for Mac being released - they may have already changed by the time you read this post!

This is a beta app so there's no guarantees, for me the app has been very stable - but I'm also running it on High Sierra. However as the builds can literally be released every few hours (depending on what is being added or changed) this could change at the drop of a hat - so be warned 😉.

We have the sketch icon again! It's cute, and helpful to distinguish between the two apps in your dock. Personally I put OmniFocus 2 in a folder in Applications called "OmniFocus 2" and the beta in a folder called "OmniFocus 3" (yes, I was feeling creative, however did you guess‽). This means if you launch the app via spotlight you get a helpful text hint about which version of the app you're launching too. 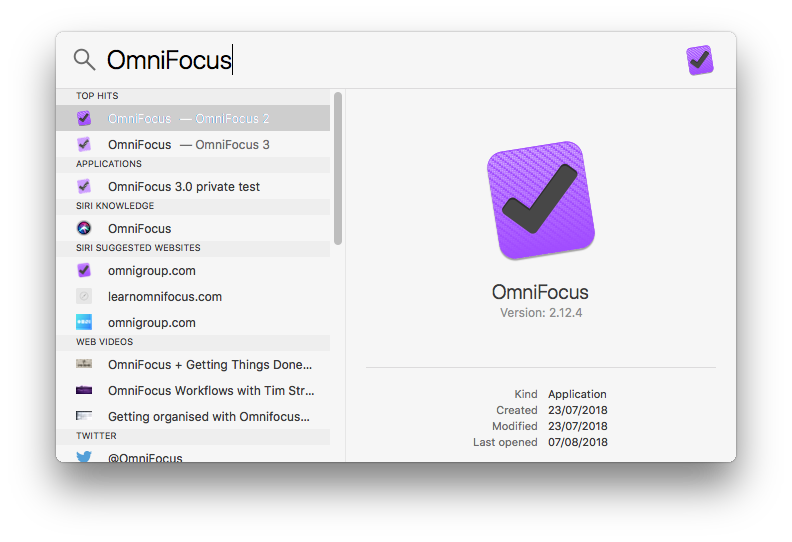 Interleaved tasks and calendar events have made their way to the Mac in the forecast view. This is really handy for putting my day together and I'm a big fan of this on iOS. 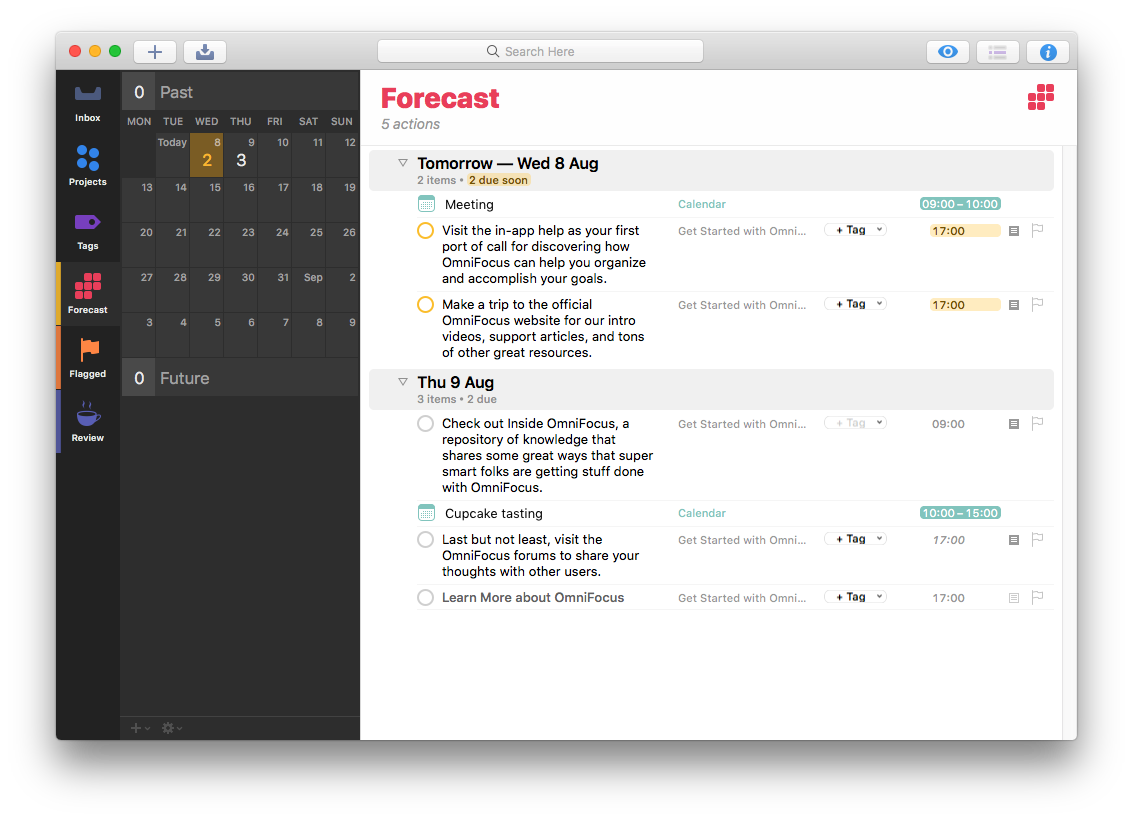 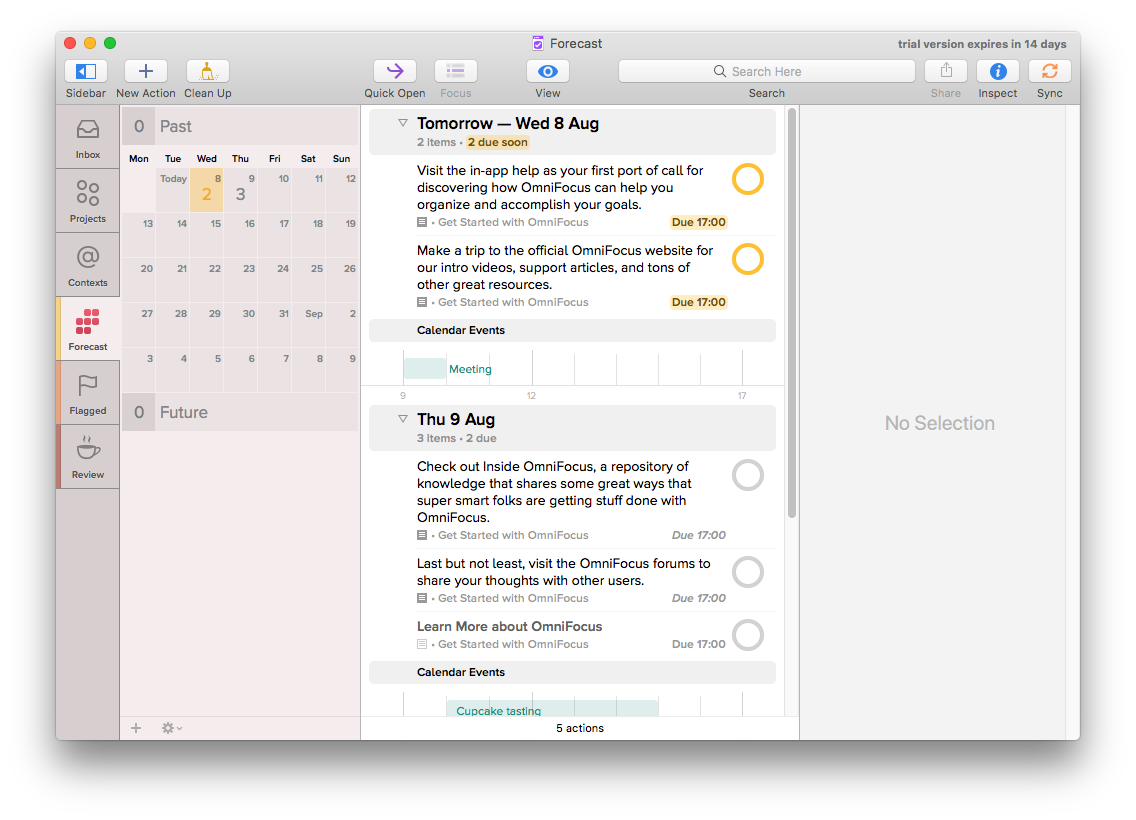 I find this view much more beneficial than the gantt style view in OmniFocus 2, just because it brings everything together.

OmniFocus looks different now, for example the toolbar across the top is much slimmer and by default includes fewer actions - though as always you can customise it by right clicking on it to add more options. The sidebar where the perspectives (and any starred custom perspectives) are listed, as well as the area where the project or tag list is shown have a dark background too, which I find helps me focus on the tasks area - the important things! 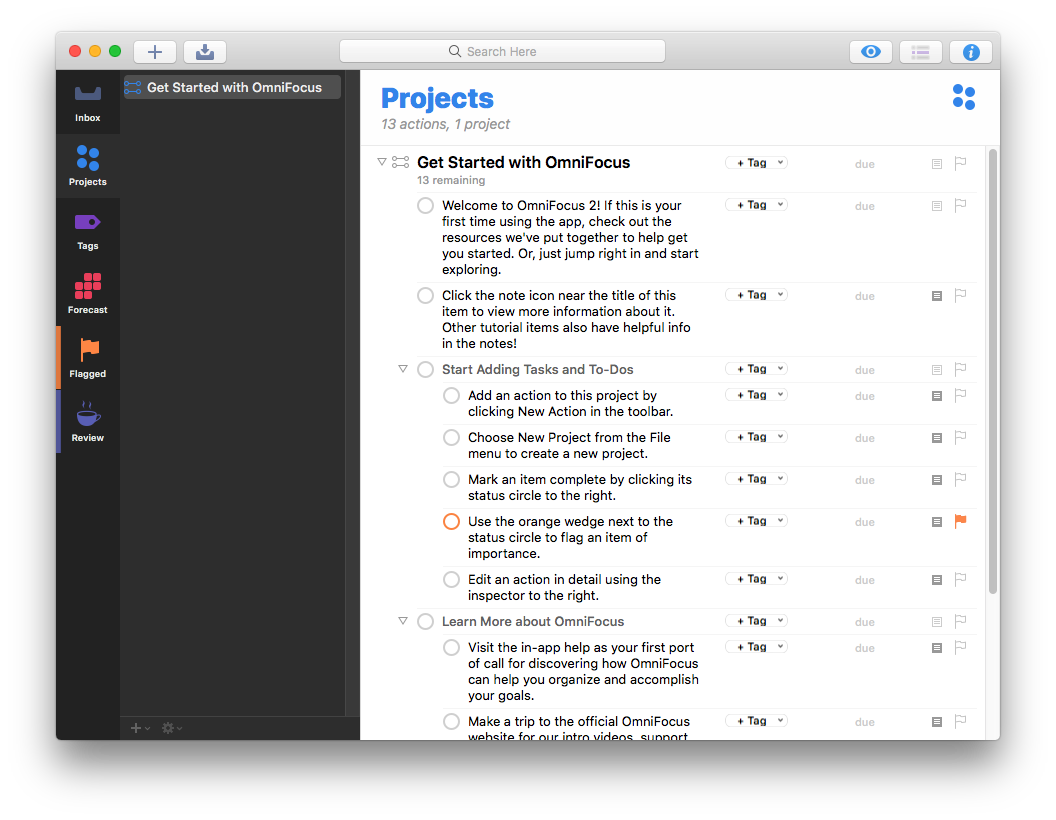 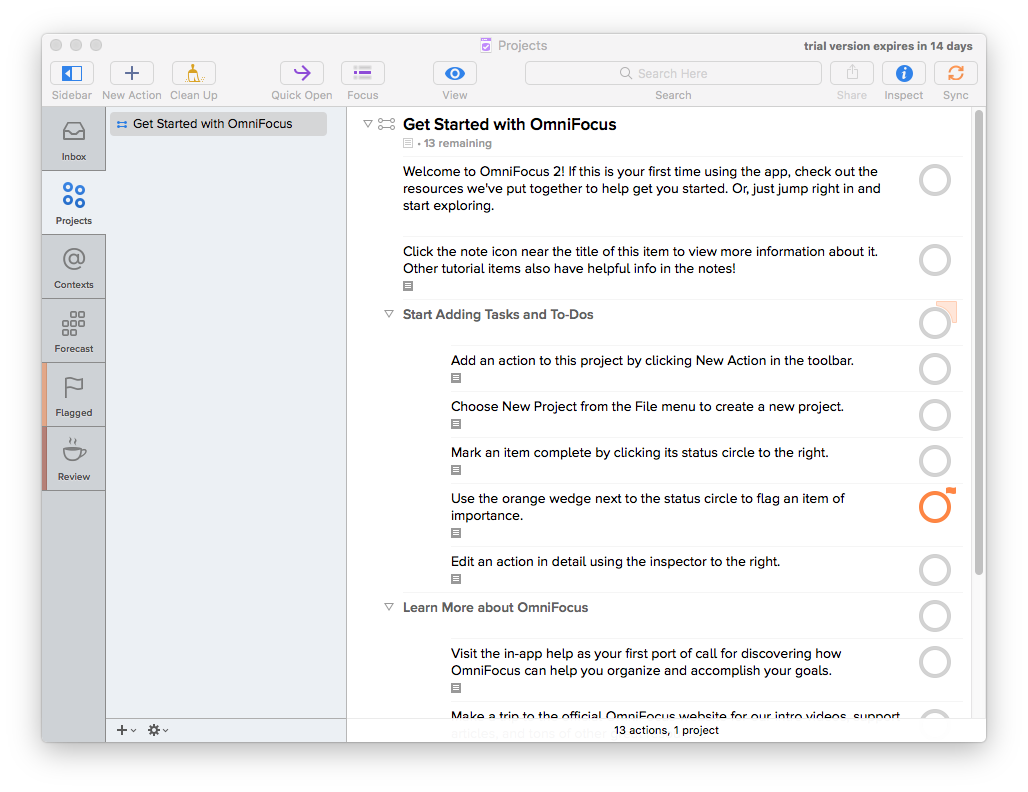 One place where you can see some subtle, but effective changes to the design is in the inspector. For example the status of the selected item has changed from a dropdown to segmented controls - the iOS equivalent of radio buttons (you have probably seen these in the maps app, to say that you want to see a map, transit, or satellite view). Tags of course have changed too, so that you could see multiple tags which are assigned to the current item at the same time.

In OmniFocus 3 for iOS we got custom repeats, and these have been brought over to the Mac as well. The place where this really shows is in the monthly where you can specify that a task should repeat on day X of the month, or you can specify a repeat on the yth zday of each month (e.g. the second Tuesday). These repeats have come in very handy for me - for example I submit my timesheet for last month on the first Monday of the next month. 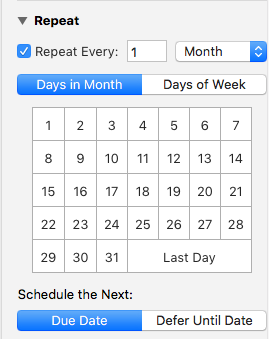 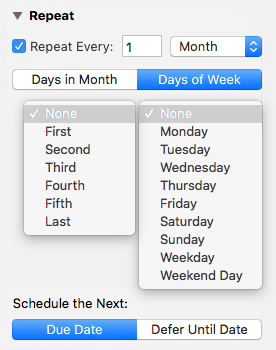 Another feature we're now seeing on the Mac is enhanced custom perspectives. You can build these by nesting rules - if you've used Hazel or created smart folders in Finder then you'll be familiar with creating the rules (click the + to add a new one), and you can press ALT++ to add a nested rule. A new feature here that's not yet on iOS is the ability to change the overarching rule, on iOS it defaults to "all of", and this can be changed to "any of" or "none of" in the new Mac version - though at the time of writing this doesn't yet sync to iOS. 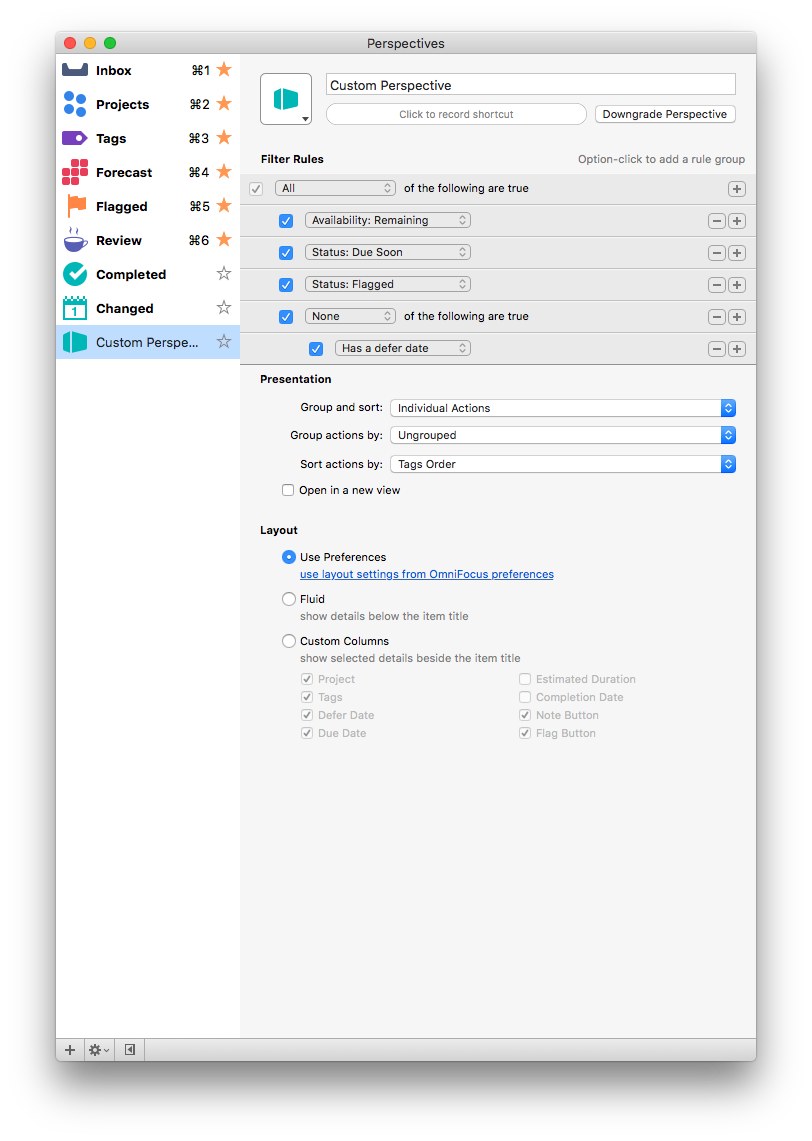 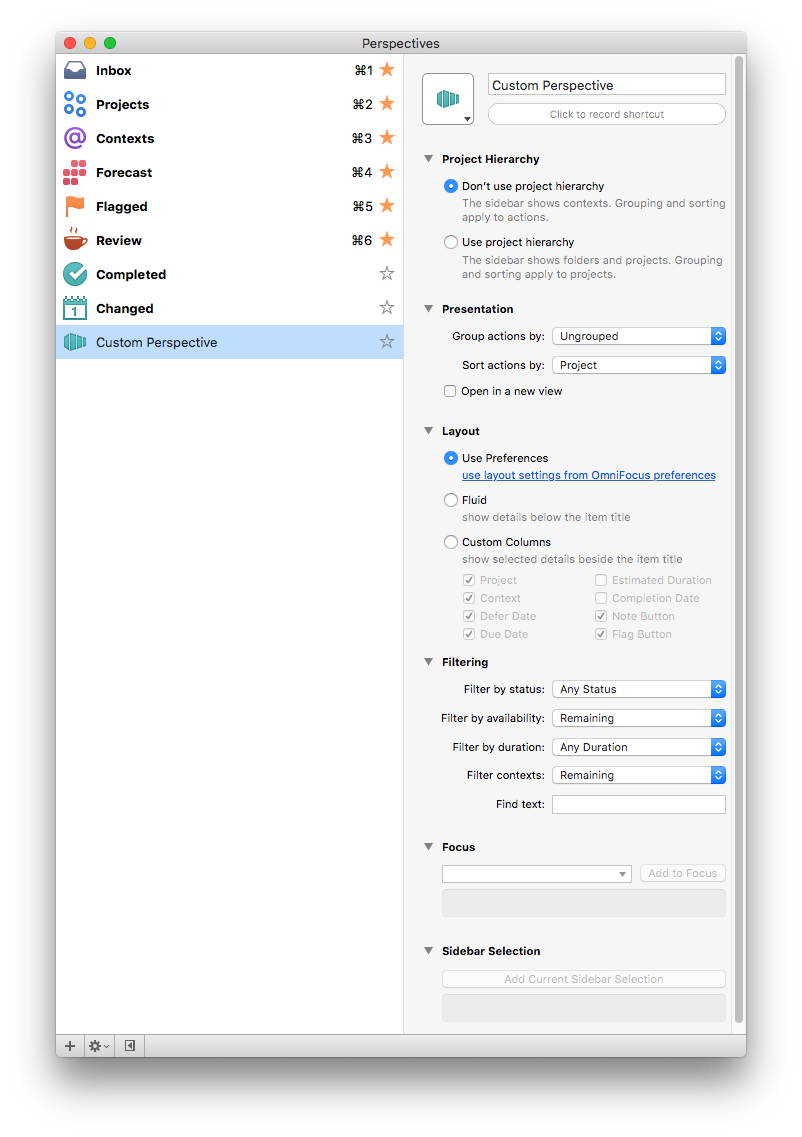 I'm very excited about the new OmniFocus 3 for Mac, and really looking forward to seeing how it evolves throughout the beta process!